This week Matthew Greenwood, author of The Treachery at Nether Stowey, blogs about the nature of historical fiction: 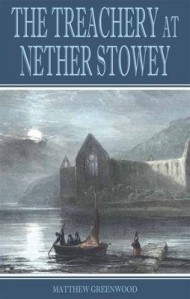 “I really enjoyed your historical novel,” someone said to me, “there’s just one thing …”

“It’s fiction,” I countered, feeling fairly confident in my argument. “You know, the opposite of fact!”

Well, I didn’t actually say the second bit out loud. That might have seemed a bit defensive. But it’s what I thought. After all, that’s the nature of fiction, isn’t it? Something we make up?

Except it’s not so simple as that. I once saw a programme in which a reader praised Peter Carey’s ‘Parrot and Olivier in America’ for being well-researched. This was despite the fact that, in the book itself, Carey complains no novelist should really have to provide a

In the end I did what all aspiring young artists do. I asked my mother’s opinion.

“I didn’t like to say anything,” she replied breezily. “But I got a question right about Eleanor of Aquitaine on University Challenge. And all thanks to Philippa Gregory …”

Well, there’s no arguing with that. But

where exactly does this leave my novel? Because, in the tradition of MacKinlay Kantor’s counterfactual ‘If The South Had Won The Civil War’, it takes a particular historical incident – in this case the British government’s despatch of a spy to investigate the activities of Coleridge and Wordsworth at a time of heightened invasion alarm – and imagines what might have happened if things had played out differently. Might the names of two great Romantic poets actually have occupied a very different place in history?

By creating the novel out of contemporary documents – diaries, letters, court records, official memoranda – I wanted to place the reader in the position of historian, with ultimate power to interpret such sources. And with all the multiple perspectives, claims, counter-claims, and contingencies, one thing I hoped to illustrate was the difficulty for any historian of arriving at a single authoritative truth.

Maybe the concept of counterfactual fiction isn’t the simple tautology I first thought? Maybe it’s actually a distinct sub-genre of historical fiction? One which challenges some of our assumptions about the relationship between fact and fiction?

But I can’t say just now  I’m off to double-check a couple of things about Eleanor of Aquitaine.

[The Treachery at Nether Stowey, Matthew’s rich and rewarding novel, is available from the link to the right of this post – Cathy]

Splash me all over: